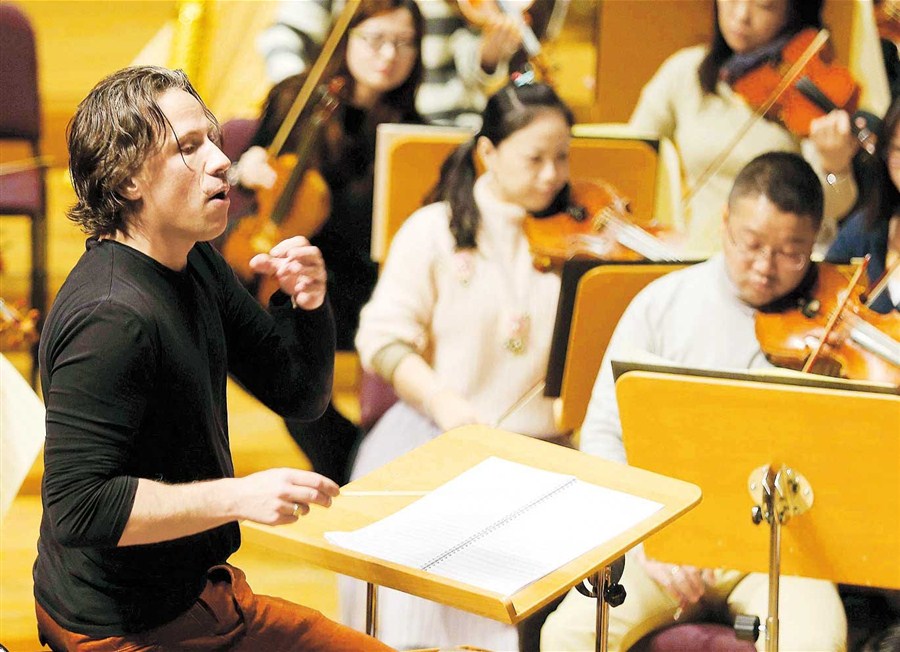 Instead of letting his Shanghai friends take him on tour of the city, the 45-year-old musician wandered around in downtown with another Estonian composer at midnight last Thursday. The two walked into a little restaurant all by themselves.

“It was exciting. We cannot speak Chinese, and nobody in the restaurant spoke English. But we managed to order some very delicious foods,” says Jarvi. “It was so cool.”

As a gift to the city he adores, Jarvi premiered his new work “ShANgHAi Wonder” last Saturday with Shanghai Symphony Orchestra at the Shanghai Symphony Hall. The Estonian National Male Choir and Shanghai Opera House Female Choir were part of it, too.

Other programs included Peeter Vahi’s “In the Mystical Land of Kaydara” and Jacques Ibert’s Flute Concerto.

“‘ShANgHAi Wonder’ is a piece based on my own feelings of the city. It encapsulates the 24 hours of Shanghai from dawn to the midnight,” says Jarvi.

Born into an Estonian music family, who immigrated to the US when he was seven years old, Jarvi grew up in New York City and began his music education early.

Credited as one of the canniest and most innovative programmers on the classical scene, Jarvi is known for his pioneering ideas in classic music. As a recording artist, Jarvi’s works range from Hollywood soundtracks such as “Cloud Atlas” and “Hunger Games” to award-winning albums on Sony and Chandos, to his eponymous series on renowned French Label Naïve Classique.

Q: What inspired you to compose “ShANgHAi Wonder?”

A: Shanghai is the first Chinese city that I ever performed and stayed in. Though I had a very bad case of poisoning here after drinking water from the tap, I was fascinated by the city. It is incredible. This is the place where you can always find something fun.

Michele Gordon has a piece “Beijing Harmony,” which I premiered in Beijing. It suddenly occurred to me that I should write something for Shanghai which has been so inspiring for me.

After our last concert in Shanghai, I took a break in Florida which gave me an opportunity to sum up my experiences. During that time, I wrote this short piece that reflects the mystery and wonder that I saw in this city. Ancient, new, international but Chinese, with lots of color, sights and smells. And above all vibrancy filled with creativity and a hope that I think every person in the world yearns for — something new and incredible — a wonder! One can imagine this any way he wants, but I see it almost as a 24-hour loop starting in the morning. It is like a ball rolling, which then can’t be stopped. The capitalization of the name “ShANgHAi” outlines a name of the person to whom this piece is dedicated to. It is also the skyline of the city that I like so much.

Q: How is Shanghai different from other big cities?

A: Shanghai is quite a counterpart to New York, Berlin and London, yet it is a Chinese city as well. It embraces both exotic and Chinese culture perfectly.

In “ShANgHAi Wonder,” you will find everything from classic music to pop, rock, minimalism and traditional Chinese music, just like what Shanghai is.

I have a dream to set up a city partnership between Shanghai and Tallinn, the capital city of Estonia. Tallinn only has 500,000 people, but it is a forward-thinking and tolerant city just like Shanghai. It is like a miniature of Shanghai.

Q: Do you think traveling helps explore possibilities in music?

A: Yes. Everything in life is inspired, including travel. When traveling, you will meet different people and get to know different cultures. It gives you new energy. Of course, artists are not professional travelers. They cannot see that much, but they can still get a taste of something in the journey. It is all about experiences. I like it, and I am always ready for my next experience.

Life is not worth living if you don’t really experience. There must be a purpose for getting up every morning. If you get up and do something, do it with a purpose. Don’t do it because everybody else does this. You do it as you want to make an impact that will make everything better. That’s why I am here, to learn and experience.

Q: What have you learnt here in China?

A: I am a strong believer in “I Ching” (Book of Changes) as well as some other ancient Chinese wisdom. They have been part of my life since my first relationship with a Taiwanese girl. It is a guide to your own inner universe.